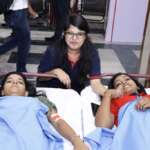 How to support people with sickle cell

Anemia (uh-NEE-me-uh) is a condition in which your blood has a lower than normal number of red blood cells. Anemia also can occur if your red blood cells don’t contain enough hemoglobin (HEE-muh-glow-bin). Hemoglobin is an iron-rich protein that gives blood its red color. This protein helps red blood cells carry oxygen from the lungs to the rest of the body. If you have anemia, your body doesn’t get enough oxygen-rich blood. As a result, you may feel tired or weak. You also may have other symptoms, such as shortness of breath, dizziness, or headaches. Severe or long-lasting anemia can damage your heart, brain, and other organs in your body. Very severe anemia may even cause death.

Blood is made up of many parts, including red blood cells, white blood cells, platelets (PLATE-lets), and plasma (the fluid portion of blood). Red blood cells are disc-shaped and look like doughnuts without holes in the center. They carry oxygen and remove carbon dioxide (a waste product) from your body. These cells are made in the bone marrow—a sponge-like tissue inside the bones.
White blood cells and platelets (PLATE-lets) also are made in the bone marrow. White blood cells help fight infection. Platelets stick together to seal small cuts or breaks on the blood vessel walls and stop bleeding. With some types of anemia, you may have low numbers of all three types of blood cells.
Anemia has three main causes: blood loss, lack of red blood cell production, or high rates of red blood cell destruction. These causes might be the result of diseases, conditions, or other factors such as a hereditary disease.

Outlook
Many types of anemia can be mild, short term, and easily treated. You can even prevent some types with a healthy diet. Other types can be treated with dietary supplements.
However, certain types of anemia can be severe, long lasting, and even life threatening if not diagnosed and treated.
If you have signs or symptoms of anemia, see your doctor to find out whether you have the condition. Treatment will depend on the cause of the anemia and how severe it is.

What is sickle cell disease?

What is sickle cell trait?

If sickle cell trait is not an illness, why are people tested?

People are tested for sickle cell trait so they understand if they might be at risk of having a baby with sickle cell disease.

A kind of hemoglobin usually present during fetal (intrauterine) life, which has a different chemical structure from normal adult hemoglobin. After birth, the fetal hemoglobin in the red blood cells is gradually replaced by the adult type of hemoglobin, this process is usually complete during the first 6 months of life.

A Gene is the ultimate unit of inheritance, and is carried by the chromosome. Genes determine our various characteristics such as hair texture, skin color, height, shape of nose, lips, etc., including the kind of hemoglobin in the red blood cells. Genes, which are made up of DNA, act as instructions to make molecules called proteins. In humans, genes vary in size from a few hundred DNA bases to more than 2 million bases. The Human Genome Project has estimated that humans have between 20,000 and 25,000 genes.

What medical problems are caused by sickle cell disease?

How many people have sickle cell disease?

Sickle cell disease is a global health problem. In the United States it is estimated that over 100,000 people have sickle cell disease. About 2,000 babies are born with the disease each year in America.

If sickle cell trait is not an illness, why are people tested?

People are tested for sickle cell trait so they understand if they might be at risk of having a baby with sickle cell disease.

In genetic counseling, specially-trained professionals help people learn about genetic conditions, find out their chances of being affected by or having a child or other family member with a genetic condition, and make informed decisions about testing and treatment. This communication process between health care provider and client, emphasizes providing accurate and up-to-date information about a genetic disorder in a sensitive and supportive, non-directive manner.

Genetic mutation is a permanent alteration in the DNA (a change in hereditary characteristics due to a permanent change in a gene) sequence that makes up a gene, such that the sequence differs from what is found in most people. Mutations range in size; they can affect anywhere from a single DNA building block (base pair) to a large segment of a chromosome that includes multiple genes.

The chemical substance (an iron containing protein) of the red blood cell which carries oxygen to the tissues, and gives the cell its red color

How long does a person with sickle cell disease live?

The average life expectancy in America has improved since all children are now screened for it. Life expectancy has now increased to the mid 40 years of age range.

Are people of African descent the only group affected?

No. It is really important to recognize sickle cell disease is not just a disease of black people. Latinos have the second most common incidence in the US. Importantly, sickle cell disease is present globally including in those of the following ancestries: Portuguese, Spanish, French Corsicans, Sardinians, Sicilians, mainland Italians, Greeks, Turks and Cypriots. Sickle cell disease also appears in Middle Eastern countries and in Asia. The country with the third highest prevalence in the world is India.

Is there a cure?

There is no universal cure for sickle cell disease. Those who are eligible to receive a bone marrow transplant do have a chance at a cure. Research in gene therapy is currently underway.

To receive certain defined characteristics from a parent by transmission of the genes in the egg and sperm.

What are some promising treatment developments?

There are dozens of new treatments currently under investigation. Recently, in 2017, the first new treatment for SCD was approved by the FDA. Endari reduces the frequency of pain episodes and can be given to individuals age 5 and older who either do or don’t already take hydroxyurea.

Can people with sickle cell disease live a productive life?

Yes. But like all patients with chronic disease, sickle cell patients are best managed in a comprehensive multi-disciplinary program of care and a strong extended support system.

An inherited disorder of the red blood cells in which the hemoglobin (the red oxygen carrying pigment of the cell) is different from the usual type. This unusual hemoglobin results in the production of unusually shaped cells, which do not survive the usual length of time in the blood circulation. Thus, anemia results. Sickle cell anemia is the result of the inheritance of the gene for sickle hemoglobin (S) from both parents.

The term sickle cell disease (SCD) describes a group of inherited red blood cell disorders. People with SCD have abnormal hemoglobin, called hemoglobin S or sickle hemoglobin, in their red blood cells. People who have SCD inherit two abnormal hemoglobin genes, one from each parent. In all forms of SCD, at least one of the two abnormal genes causes a person’s body to make hemoglobin S. When a person has two hemoglobin S genes, Hemoglobin SS, the disease is called sickle cell anemia. This is the most common and often most severe kind of SCD. Other forms of Sickle Cell Disease include SC, CC, S Beta Zero thalassemia, S Beta+ thalassemia, SD, and SE.

An inherited disorder of a gene in the red blood cells which results in the impaired ability to produce hemoglobin.